Herdwatch has made keeping and accessing records much easier for Leicestershire farmer Andy Webb. It helps him to record farm events on the go and improve Herd performance from the information. 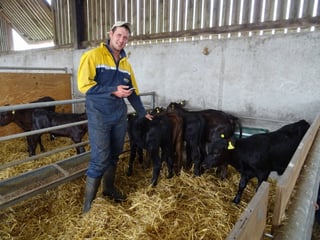 Together with his parents, Andy Webb farms a council holding at Usher Farm, near Gilmorton with additional rented land in different blocks nearby. While the holding is just 64 acres, he runs a total of 650 acres, with some rented land, some contract farmed, and some grass keep.

The unit supports 120 milking cows with some 70 followers, some are in-calf heifers and some bulling heifers, along with 60 pedigree Shropshire sheep.  Every calf and every lamb is reared on the farm, and about 100 additional calves are brought in annually, from local farmers, and reared on a variety of systems according to breed.

Herd Records on the go.

“I use Herdwatch mainly within the beef units,” he says.  “The links to BCMS are great, I can automatically update and get all the records transferred to my phone.

"It’s easy to sort animals into age groups, and I have all the records at the touch of a button."

“For me, with three sets of buildings and land around the parish, it’s perfect.  I never have to waste time going back to the office to check the record of a particular animal, I just type in the last three numbers on the ear tag, and I have access to all the information I need.”

Learn more about accessing your Herd records on the go.

Herd Performance at your fingertips.

Getting herd performance right is very important for Andy. That’s why fattening cattle are weighed monthly. Recording growth rates and quickly weeding out animals that are not growing and converting to target.  He looks for the stock to put on over 1.2kg per day. Once they stop performing to this level, it’s easy for Andy to select the ones to send off early.

“The ones that are doing particularly well I move to another group.  The weight recording on the app is excellent, it allows me to see the weight gain of any animal at the touch of a button and as I can print reports, we often sit down as a family and go through them over the dinner table. ” 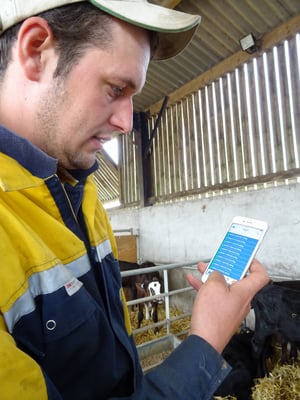 Andy accessing his herd records from the calf rearing shed.

"Herdwatch has made my job so much easier."

Each calf has an individual record on Herdwatch, with a herd of over 400 animals it is very efficient that Andy has information for each animal at the click of a button.

“I always have my phone with me as I move around, so it’s the ideal place to store information.  I love the fact that it’s cloud-based too – no need for an internet connection its works offline."

Andy recognises the amount of time he has saved courtesy of Herdwatch. Likewise he appreciated the simplicity of the app.

"It saves me so much time and once you get used to it, it’s honestly very, very, simple.”

The dairy herd is served mainly by Holstein Friesian bulls, with the Friesian bull calves put on a 12-14 month intensive indoor system.  The heifers are all reared as replacements.  He used some sexed semen this year, and although nearly twice the price, feels it was well worthwhile with 18 of 20 heifers in calf at first service.

The bull calves are reared in groups of five, then moved to groups of ten.  At the end of the fattening process, they are sold to wholesalers and most end up with retailer Tesco, the buyer of his milk.

Some Belgian Blue is also used on the dairy cows, and the farm has a Limousin bull to help ‘clean up’.  These calves, heifers and steers, are reared on the same system, but grazed for 12 months before coming inside to be finished, thereafter they go to a local butcher.  This is an 18/24 month system, depending on the time of year they’re born.

“For the time of year, the beef price is quite good at the moment, about 50p/kg up on this time last year, but you have to keep your eye on it all the time.  That’s where Herdwatch comes in, it makes my decision making much easier and much more effective.”

You too can join Andy and over 8,000 happy farmers saving time on farm paperwork and managing their farms more efficiently for just as little as £2.50 a week.

Previous Managing a full-time job and a purebred Limousin herd in Co. Laois
Next Herdwatch at the RUAS Beef and Lamb Championships