Scottish dairy farmer, George Booth, lives and works on his family farm in Lockerbie after moving up from North Yorkshire in 2006. He is a fourth-generation dairy farmer but his family had been farming for decades before that. George farms in partnership with his Mum and Dad, and occasionally his younger brother. He also has a sister who is a herd manager in New Zealand, so farming definitely is in the blood.

“We run a Holstein milking herd of around 140 and another 100 youngstock which we rear ourselves on 142 acres. We also winter 160 Swaledale sheep every year October to late March, which works very well. We silage 95 acres twice a year for fodder and have 32 acres of spring wheat for wholecrop.”

“I would be lost without Herdwatch now. I would absolutely hate going back to the old system of paper records.”

On getting started with Herdwatch, George said “I saw Herdwatch advertised on the farming forums on Facebook two years ago. After joining the Arla 360 scheme, which is Arla's highest animal and climate standards, we needed an easier way for record keeping and we gave it a go. It was extremely easy to sign up and to get started with the demo, I was signed up and trialling the app within the hour.”

George adds “We have made considerable investments on the farm since we bought and Herdwatch was another step towards modernising our farm management. We started off with a new parlour and extended the old cubicle shed before we brought the cows up from the old farm in 2006. The year after, we built a purpose built 70 cubicle shed for the youngstock along with a new pit for the wholecrop.”

“In 2018, we modernised the calf rearing side as we were struggling to get our calves to our aimed daily weight gain and were weaning them at 10-11 weeks in an old milking byre with individual pens. We installed an automatic milk feeder machine with new hygiene stations and we now group our calves from a week old in two pens big enough for 20 calves in each. It has been the best decision we have ever made as it has greatly reduced sickness in the calves by around 80% and our daily weight gain is now over 1kg.”

“My next step is to do more around breeding management within the app as it also allows us to record our heats, serves and scans.”

On recording medicine usage and feeds for their quality assurance, George told us “we always used to keep our records in the paperback medicine books and always found it a big task to keep records up to date. It was almost unworkable when searching for a treatment for a certain animal. Now, I simply scan the medicine as soon as I get it from the vet to put it into the Herdwatch app. It’s great because I can easily look back at any animal, see what treatment it got and when it got it, helping to paint a complete picture of its medicine usage.”

On preparing for their inspections, “I find Herdwatch incredibly useful for farm inspections, it doesn’t matter where you are, all the needed reports are there on your phone when you need them.  I input all feed purchases, medicine usage and even our red diesel so we can track our carbon footprint. It is so much easier than having to pull together records from bits of paper or having to ring around different companies to see how much we have used.” 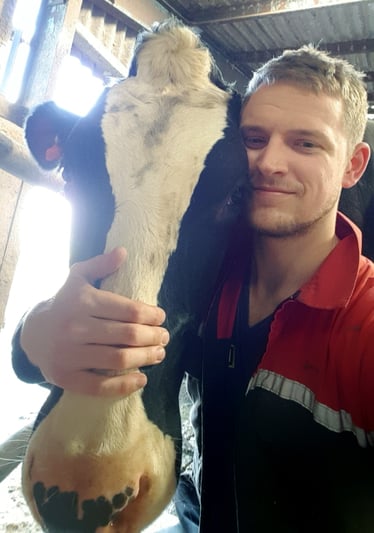 George says he “would be lost without Herdwatch now. I would absolutely hate going back to the old system of paper records. Herdwatch has transformed the way we farm and we are saving a lot of time by going digital on all our record keeping. We also have the security of knowing it is all safely stored in the cloud. We can look back at the end of each month and review our feed and medicine usage and see where we can improve. I have recommended the app to a lot of other Arla 360 members for these reasons.”

“My next step is to do more around breeding management within the app as it also allows us to record our heats, serves and scans. It then sends you handy reminders if you want to do a second serve and ultimately gives you a neat due to calf list so there is no guessing about what cows are due when. I can also do my calf registrations in seconds in the app. We use sexed semen on a lot of the herd, mostly Holstein on milkers, Holstein or Angus on the replacement heifers and Belgian Blue on those we don't want to breed off.” George said.

On the support he gets from Herdwatch, George said “the Herdwatch team are great, they are very quick to get back to me and resolve any query. If I have a question when out and about, I just use the message centre in the app as it’s so handy. I am always firing new ideas at them for the app, and they always thank me for the new ideas which I think is good. I’m really looking forward to getting going on their new NextGen app which will have a lot of those new ideas built into it.”

Previous How Herdwatch helps with your compliance?
Next Transitioning from playing professional rugby to full-time farming