Robert Jones is a fourth-generation pedigree Hereford breeder & Suckler farmer from Keenagh, Co. Longford. Robert is farming part time alongside his father Edwin, with the help of his wife Sinead, mother Pearl and siblings Alan & Nicole. The family farm is 105 acres in total with 80 acres of their own land and 25 acres rented. Breeding Herefords has been tradition in the Jones family for over four generations.

Robert currently has 90 animals in the herd and takes great care ensuring the animals are of the highest quality. “We try to maintain quality at all costs, aiming for 5-star animals."

Robert has seen his farm size develop dramatically in the last few years with a constant emphasis on improvement to the farm. “There is a new building going up every three to four years, we try to reseed a few acres every year and we are constantly working on drainage trying to improve the land year on year, there is always another job waiting to be done to improve operations on the farm.” One of those important improvements to running the farm came in the form of technology when Robert started using Herdwatch to improve his farm management and make life a little bit easier over 4 years ago!

INTRODUCING TECHNOLOGY TO EASE THE STRESS

Robert got set up on Herdwatch back in 2017 to help with Bord Bia farm assurance paperwork and hasn’t looked back since - “We had our Bord Bia audit back in 2017 and I had a few late nights in the lead up to it chasing paperwork and looking for dockets. My mother just said to me there must be an easier way than this, I had heard about Herdwatch off other farmers who were using the app so I downloaded it. The next day one of the Herdwatch team gave me a call, we spent a bit of time running through various features and I signed up there and then over the phone.”

“We had our Bord Bia audit back in 2017 and I had a few late nights in the lead up to it chasing paperwork and looking for dockets. My mother just said to me there must be an easier way than this."

“Before Herdwatch it was so easy to get caught out on withdrawals and trying to keep track of medicines was a nightmare. Now with Herdwatch, that problem is eliminated and there is no way I would go back to pen & paper. The minute the medicine is bought, it is recorded in the app so I know exactly what I have in my virtual medicine cabinet. Whether I am injecting or dosing, I have the phone out and record the treatments and the animal it was given to as I go, nothing gets forgotten about. Before I would be inside later that night second guessing if I had dosed a cow or not, that’s a thing of the past now.”

MANAGING CALVING SEASON WITH SILAGE SEASON ON A TIGHT SCHEDULE 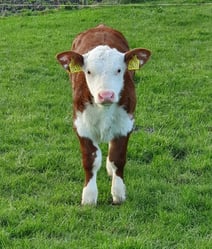 Robert operates a summer calving system which begins in July and finds himself extremely busy at that time of year as the family also operates a silage contracting business over the summer months. “I am always rushing and racing that time of the year, I don’t have time to be messing around with paperwork, registering calves before would have been in paper format but now the calf is registered as soon as it is dropped, no messing around with bits of paper or having a panic weeks after a calf is born thinking “Did I register that calf or not?” I can rest easy in the knowledge it’s done straight away and get on with other jobs.”

It is no surprise that Robert’s favourite feature within the app is the breeding management! “It is the best feature of all.” Robert has found himself getting into a daily routine of starting his day with a browse through Herdwatch! Every morning at the breakfast table Robert takes out Herdwatch to have a look at his breeding to ensure he does not miss a trick. “I have a look every morning when I’m eating the breakfast to see what cows are 20 days out so I can then keep an eye on them, there’s no guessing, nothing is left to chance. It’s just a way more efficient method of farming.” Robert uses 50% AI and 50% stock bull on the farm recording all serves in the app which in turn shares them with ICBF.

Robert records weights regularly inputting all his weights into the app. “I weigh the cattle quite a bit so it’s great, I can keep a close eye on how they are performing, the app tells me the animals average daily gain on the spot allowing me to make more informed decisions to ensure they are performing at a high quality and thriving all the time.”

“I have a look every morning when I’m eating the breakfast to see what cows are 20 days out so I can then keep an eye on them, there’s no guessing, nothing is left to chance. It’s just a way more efficient method of farming.”

MAPPING HIS FARM WITH HERDWATCH

There is a lot more to Herdwatch than just farm compliance and one of the major new features added last September was the ability for farmers to map their farm using satellite imagery in the Herdwatch app. Whilst Robert has not mapped every field yet, he has been very impressed with the new feature and the ones he has “I’ve mapped a few fields and once you simply map the outline of the field on the satellite image 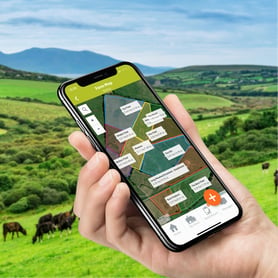 in the app, it automatically calculated the acreage for me.”

“I was able to name and colour-code the fields based on what their use and I reckon it will make life a lot easier on the contracting side too as farmers will be able to just point the fields to be mowed out on the map for me. It also allows me to keep all the paddocks and spray records for specific fields in the app which is very handy for cross-compliance inspections.

“Before Herdwatch I would have to come in and spend hours every week doing paperwork but that’s all gone now, now when I come in off the farm for the night I’m done and I can have my evenings to relax and do whatever I want, I have so much more free time.”

His days of worry in the lead up to Bord Bia audits are now a thing of the past, “it's fantastic for the audits, before it was 3 or 4 days preparation, now it’s just five minutes to print what I need and hand it straight to the inspector.”

“I love Herdwatch because I find it so simple to use, everything is there on the screen in front of you. It saves all my records to the cloud so I don’t have to worry if I were to drop my phone into a pit or it gets lost, my records are always safe.”

“I have recommended Herdwatch to several other farmers, it makes life so much easier and makes for much better book-keeping, nothing gets left behind and I find myself much more productive with it.”

Herdwatch is fully compliant with Bord Bia quality assurance and cross-compliance standards allowing farmers to record all their farm paperwork on a simple to use app. It is fully integrated with ICBF so farmers can see their breeding, milk records and EBI/Eurostar information on Herdwatch.

You too can join Robert and over 16,000+ other happy farmers saving time on farm paperwork and managing their farms more efficiently, just give us a call on 0505 34400 or visit www.herdwatch.com for more information.

Previous The Ideal Christmas Gift For Farmers This Year
Next FREE Herdwatch Jacket for new sign-ups this January!