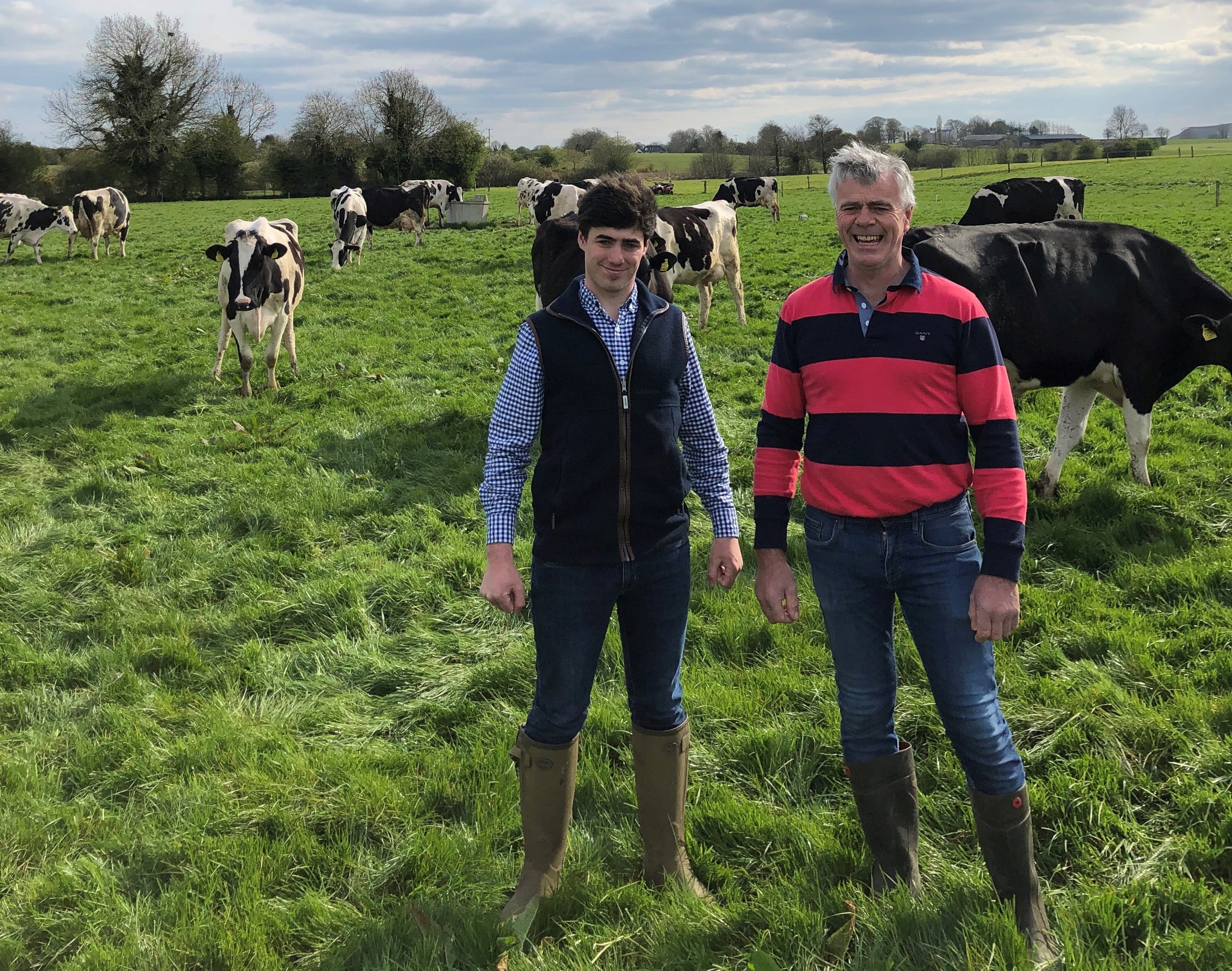 John is currently finishing his Degree in Agriculture at Harper Adams University in the UK, and explains how he is thoroughly enjoying the learning process and getting a great education on agriculture, before he comes home to help manage his own farm full time with his father and brothers - “The course is very diverse and gives a great outlook on farm animal production for the future, the lecturers are top class and always on hand to give advice or help whenever it’s needed. I am getting great exposure to different farming practices that you don’t see much back home.” John added.

John has been lucky enough to visit a large variety of farms in the UK, observing different types of farm practices in action and picking up techniques he might one day use on his own farm back in Meath - “I am currently relief milking on a farm that milks three times a day on an indoor model with cows yielding up to 11,600 litres and 930kg milk solids and I’ll definitely be bringing home a few of the ideas from here.”

As part of his course, John also completed a placement working for Dale Farming, a family farming business that manages seven herds across the UK, from Shropshire to South West Scotland - “The farm I was based on was a 450-cow herd operating a self-feed silage clamp. The pit was 120 metres long with a one-cut, two-cut, and maze all in the one pit, there was an electric fence that was moved every day and it was vital that it had to be 50cm away from the face of the pit. The cows on this farm were yielding 6,900 litres and 550kg milk solids lactation.”

“All approaches to dairy farm operations need to be considered and a high input, high output system could be used more on Irish dairy farms to help keep farms sustainable and profitable in the future”

Is High Input/High Output the future of Irish Dairy Farming?

Back home in Meath in the 80’s and 90’s John’s father Don would have employed traditional British Friesians, yielding 4,500 litres per cow. He then started crossing the British Friesians with commercial Holsteins, “On the first cross, we noticed the food conversion ratio increased due to the better response to feed which resulted in increased milk solids and volume. Throughout the years, we used more Holstein genetics and in 2003, we registered Holsteins with a continuous focus on increasing our yields and milk solids.”

“Today, the cows are producing 9,000 litres and over 600kg milk solids. One of the main advantages we noticed from the switch was the replacement rate reduced to 15%, this decrease was largely due to the percentage rollover from cows and we are now able to sell our surplus stock on.”

“We are currently looking at putting up a new cubical barn for 120 cows and to increase production to 10,000 litres and 700kg milk solids per cow, with potentially half indoor production in the future.”

John has worked in both high input and low input systems on his travels and can see advantages of both - “There are elements of both systems that I like and when they are combined, it can result in very sustainable and profitable production. Using the high yields from purebred Holsteins and combining it with a grass-based system, results in a system that is environmentally friendly and indeed profitable for the farmer.”

“I think more high input dairy herds will become more popular in the country, however there's definitely a place for both.”

Helping on the farm from afar

John is tech-savvy having grown up in the age of significant technological advancements, and he is now hoping to pass on his knowledge to his father and improve operations on the farm through technology - “I would be into technology but my dad is only catching up and I’m trying to teach him a few things. Soon enough, technology will be a necessity on all farms to help improve farm operations but also save time & money.”

On getting started with Herdwatch, John said “I first heard about Herdwatch at Dairy Tech in Stoneleigh Park in 2019. I immediately thought it was a very useful farm management tool and really easy to use so the benefits were obvious we got signed up and had our animals in the app in less than a minute.”

Before Herdwatch, John’s mother Ursula handled all the paperwork but that has all changed. Now John, aided by his two brothers Timothy and Eric, take care of the farm management tasks using Herdwatch on their phones when they are out and about on the farm during the days. John even looks after it when he is not in the country!

“The biggest benefit I find with Herdwatch is the reduced workload and having all your documents in the one place with ease of access, it’s all there in the app and so easy to use.”

The Digital Age of Tik Tok

John has over 15,000 followers on Tik Tok, having joined the app just over a year ago. “At the start I was just putting up videos messing around on the farm, then I started to gain quite a following and decided to take it a bit more seriously and raise awareness of Irish and British farming and the different techniques I use on the farm”.

Johns’ charisma and love of farming is evident in his videos, providing content from milking to silage and everything in between while sharing a few opinions and techniques along the way, John has established a loyal following which continues to grow.

You too can join John and over 15,000 other happy farmers saving time on farm paperwork and managing their farms more efficiently, download the Herdwatch app today

Previous Farm Smart: Getting the most out of your farm business by introducing technology
Next FARM SMART: Waterhayne Cows – milking four times a day in Devon…