Cammy Wilson, better known as The Sheep Game, has seen a meteoric rise to fame since launching his YouTube channel, which now boasts over 150,000 followers & 50 million views. Many people may not know this but Cammy served 12 years as a police officer before deciding to concentrate on full time farming and indeed his career on YouTube!

"I used to be a police officer, I did that for 12 years until The Sheep Game social media and merchandise and everything gave me enough income on the side to replace what I was getting from the police and allowed me to go into full-time farming, it has changed my life massively!"

Cammy runs a 1,000 head sheep farm on approximately 1,000 acres in the South West of Scotland in Ayreshire. Cammy runs the farm with his partner Lizzie and young son Jock although he jokes "he's not really fit to do much yet, he is still in the growing stage!"

"I was born and bred on the farm here, my father was a shepherd here for most of my life until he sadly passed away a few years ago, sheep has always been a thing I have been interested in and loved doing!" The farm is operated all on seasonal grazing and rented ground.

"As well as sheep farming here I also run The Sheep Game YouTube channel which has been incredibly well received, its absolutely fantastic the feedback I get from my peers in the farming world and beyond."

"I have been using Flockwatch now for about 6 months, it was coming to lambing time and we were looking for a software app to use to start moving forward and start doing things a bit better and the Flockwatch team came to me!"

"The Flockwatch app is essentially an all in one data software app that I can input movements, individual sheep references & notes, I can register lambs against any particular sheep, all our medicines, everything you can think of doing recording next to your sheep you can do it on Flockwatch."

Before Flockwatch Cammy was taking photos of ear ta 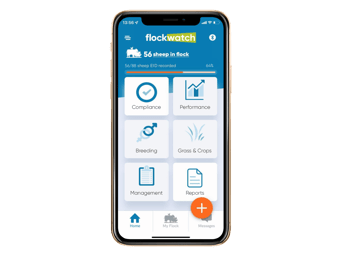 gs, medicine bottles or writing notes in his phone. "We had great intentions to go home that night and update it but that rarely happened! It would usually be a month down the line back tracking through photos it was just quite a farce!"

"If I see a sheep with mastitis and I catch her out in the field and give her an injection I look at the last four digits of her ear tag, type that into the app there and then, I don't even need my stick reader with me, brings that sheep up and I can record she's had that jab there and then out in the field!"

"Probably my favourite feature of the app is the ability to do my movements off the farm and record prices of animals sold, so if I'm doing a movement off to market in then has a box where I can input the price those lambs were sold for and I can refer back to that!"

"I would absolutely recommend Flockwatch to other farmers, the key thing being the simplicity of the app, you don't have to go into some 6 week training program to master it. It almost seems super expensive and well developed because of its simplicity!"

"Its a fantastic product to use, super simple and actually in some weird way that us farmers are, it's quite enjoyable!"

You too can join Cammy & over 17,000 other farmers using Flockwatch & Herdwatch to simplify their farm management! Download the FREE app today by clicking the button below!